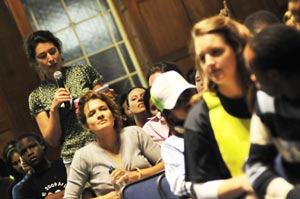 Left: youth factor - UCT students had a chance to interrogate candidates at last night's pre-election debate in the Jameson Hall.

It didn't take much to get the Minister of Finance Trevor Manuel splashed across the city's press this morning after last night's pre-election debate, hosted by the Faculty of Humanities, the Students' Representative Council and other student bodies, in the Jameson Hall.

The Dalai Lama was all it took.

Manuel's response, citing the government's reasons for not granting the Nobel Peace Laureate a visa for the now scratched peace conference, was met by derision from the student audience that had packed the hall, in the full glare of TV cameras.

Refusing the "feudal" Dalai Lama had been a tough decision, the "equivalent of trying to shoot Bambi", Manuel said.

The Congress of the People's (COPE) Phillip Dexter was quick off the mark, a neat parry to Manuel's earlier barb about COPE not being in government.

"This shows the government's foreign policy is determined by the highest bidder."

To which the Democratic Alliance's (DA) Ryan Coetzee added: "South Africa's foreign policy seems to be made in Beijing."

The Independent Democrats' (ID) Lance Greyling suggested the government had at least been consistent; there was that inaugural vote against the UN Security Council on Myanmar, and the Robert Mugabe affair.

There was a spat between the Minister and Coetzee over whether the Manuel had blue flashing lights on his car, in addition to his two bodyguards.

"I have been a Minister for 15 years and I have never had blue lights," shot back Manuel.

Manuel demanded to know from Coetzee why, despite the DA's two-state stance on Israel and Palestine, he had "not ever heard a statement for the people of Palestine".

Not one chair took flight - it was a pre-election debate - and most of the heat was on-stage with host Professor Paula Ensor, Dean of Humanities, and question master Zwele Jolobe settled between the candidates.

Afterwards, ideological differences fell away like old skin. Candidates exchanged robust hugs. For a moment, politics seemed like a very cosy affair, arguments about who had the largest gas reserves momentarily forgotten.

Taurai Madzima, a second-year mechanical engineering student clad in party colours, said: "I enjoyed it. All the parties were quite honest. A lot of debate is a good thing."

Ensor, too, was pleased with the outcome. "The audience was attentive and engaged, it was challenging, respectful, robust at times, but also friendly."

The faculty had decided to co-host the event to give UCT students an opportunity to hear about the main parties' programmes.

"The youth factor is a significant one in this election, and we wanted to do our bit to increase awareness among students of the main issues at stake."

Outside on the Jammie Steps, ANC supporters were duelling DA supporters in a toyi-toyi dance-off. It was hard to distinguish the better footwork, but the ANC had a distinct edge in numbers.