'We can' campaign to destigmatise TB

On Monday HAICU (HIV/AIDS Co-ordination-UCT) co-ordinated the distribution of flyers on campus ahead of World TB Day on 24 March.

The campaign highlights TB symptoms, prevention, and the need to destigmatise the disease. Also listed are the TB testing clinics closest to campus. 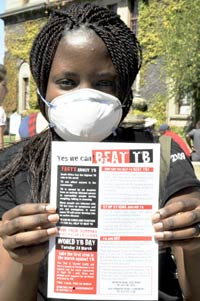 The City of Cape Town and the Provincial Department of Health have urged the community to wear surgical masks in solidarity with the millions of people around the world infected with TB. Members of the Students Representative Council, TAC UCT and HAICU's AIDS Community Educators wore masks on Jameson Plaza when they distributed the flyers.

UCT is also supporting the joint initiatives by the City of Cape Town and the Provincial Department of Health to raise awareness of the disease and, importantly, the stigma it carries. This is a significant deterrent to treatment.

Globally, the spread of the disease has been aggravated by the co-epidemic of HIV and TB and, more recently, the rise of drug-resistant TB.

Members of the community marched from Kaisergracht in District Six to Parliament on World TB Day. This was organised by the Treatment Action Campaign (TAC) and TB/HIV Care to ask the government for more resources to fight TB.

The World Health Organisation's 2009 World TB Day slogan is "I am stopping TB". UCT has adapted their suggested tagline to read: "We can beat TB."