Staff and students urged to sign on to switch off 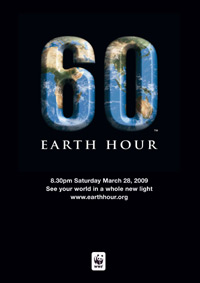 Climate change is one of the most serious problems facing our world today. On Saturday, 28 March, at 20h30, millions of people worldwide will switch off their lights to make a statement of concern about the future of our planet as part of Earth Hour, an event led by the World Wide Fund for Nature (WWF).

UCT has pledged to support Earth Hour, and Vice-Chancellor Dr Max Price has called on all staff and student to take part in this historic event.

"Each signature will make a difference," says John Critien, executive director of Properties & Services. "By signing up, it shows that UCT staff and students form part of a global community, and are as concerned about global warming as citizens of other nations."

Most UCT lights will be switched off as well, except in those areas where lights must remain on for security reasons.

Earth Hour got its start just two years ago, and is now the largest event of its kind in the world. Last year, more than 50 million people participated. The lights went out at the Empire State Building, the Golden Gate Bridge, the Sydney Opera House and the Coliseum in Rome, to name just a few.

Even Google's homepage went black for the day.

This year, Earth Hour will be even bigger-already 500 cities in over 74 countries have agreed to take part. This includes Cape Town, Johannesburg, London, Paris, Rio de Janeiro, Sydney, Rome and Dubai, with more signing up every day. 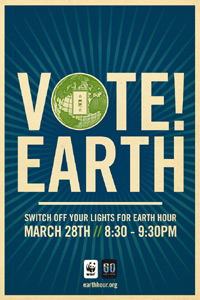 Participating in Earth Hour is easy, fun and free. What you need to do is sign up now on www.earthhour.org.za.

Every name will be part of a larger petition of an expected one billion names that will be sent to Copenhagen at the end of the year to put pressure on world leaders to pass legislation on climate change.

It's great that you'll switch your lights off on 28 March, but don't forget to sign up for the global petition. It's simple.