Ikey Tigers take it for Monte 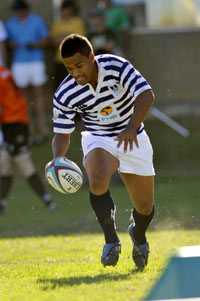 The UCT Ikey Tigers beat the wind, a red card, and the Nelson Mandela Metropolitan University (NMMU) with a 36-17 bonus-point win to claim the Monte Taljaard Trophy in Port Elizabeth on Monday.

UCT have now moved to second spot on the FNB Varsity Cup log.

The teams lined up for an emotional minute's silence for PE boy and UCT flank Monte Taljaard, who died in a car accident last September. Taljaard's parents shook hands with each of the team, many of whom they know as friends of their son.

The Ikeys produced five tries in extremely windy conditions and dominated early on to go ahead 19-0. The first try, after 10 minutes, came from centre Sean van Tonder who had another strong showing with his centre partner Peter Engelbrecht.

Scrumhalf JP Robert got a rare start, as did flyhalf Michael Nel. Robert had a great afternoon, with perfect service - even in the wind - clinching the Man of the Match award.

The Ikeys ran hard against the wind and quickly added two more tries for the 19-0 lead, through Therlow Pietersen and Dane Johnson who consistently climb the Varsity Cup's top try scorer's list.

But the spirited NMMU hit back with two late first-half tries to make it 19-14.

UCT had the wind behind them, but lost lock Michael Passaportis when he was red carded for foul play early in the half. NMMU pushed hard, dominating the rattled Ikeys in the scrum, but a long-range try by Engelbrecht put the Ikeys out of reach at 26-14.

The Ikeys crossed the line last, when Johnson grabbed his second try. UCT fullback Pietersen added the conversion and also kicked a late penalty to claim a 36-17 victory.

Tuks lost for the second week in a row, going down to Shimlas 39-22.