Staff think on feet as first-years pour in 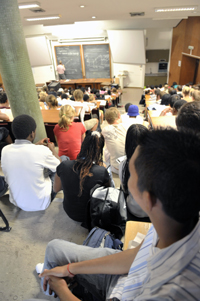 A spring tide of first-year students has inspired some clever wikkeling, as Acting DVC Professor Daya Reddy put it, in a few UCT departments that have seen a sharp jump in registrations.

But the flood of students is a result of this year's five-percent hike in take-up rates, mirroring the higher proportion of 'university admissible' school leavers, said admissions director Carl Herman.

He also ascribed the hike to UCT's successful marketing campaigns, particularly those highlighting its cache of A-rated researchers, centres of excellence, and the Times Higher Education QS World University Rankings 2008, which placed UCT among the world's top 200 institutions.

In the faculties of commerce and engineering and the built environment (EBE), the take-up of places was far greater than expected. The knock-on has been felt in mathematics and applied mathematics and in statistical sciences, departments that serve large numbers of additional students from different faculties.

Head of the Department of Physics, Professor David Aschman, said when they learnt there would be 100 more EBE students in the first-year PHY1010W class (physics for engineers) they faced a real problem.

"The easy solution was to buy our way out, and get our successful and popular lecturer, Gregor Leigh, to lecture in both first and second period, and to use our big lecture venue, RW James A, for this, twinning in a complementary way with maths."

This didn't work, and no other big lecture theatre was available.

"The first day of term, the physics lecture was bursting," Aschman said. "Fifty or more students were standing in the aisles, muttering, and walking away. It was chaos."

"We sat down on a hot afternoon, served Cokes, and it was a stand off, neither side giving way, until Geoff de Wet quietly said: 'By the way, NSLT is available in first period'."

Aschman points out the irony: the New Science Lecture Theatre, "that steeply raked cavern of a post-war horror", was built in 1948 to cope with the boom in student numbers due to returning ex-servicemen.

"So, once again physics is lectured in NSLT. Plus Ã§a change ..."

Physics also plans to get around the numbers problem by purchasing cameras to project the images of small objects onto a screen, visible to all the students in large lecture venues.

They've made innovative use of vacant laboratory spaces and have managed to secure the services of a few retired lecturers to help.

De Wet said: "This year has been particularly difficult because it hasn't followed the pattern of previous years.

"What happens is that class numbers change from day to day. Students change courses and numbers fluctuate on a daily basis.

"So you're chasing a moving target all the time. And this riles those lecturers who have to change venues."

In the Faculty of Commerce's Academic Development Programme (ADP) numbers have more than doubled for economics ADP courses. The School of Economics runs one of the most popular first-year courses (1 350 students in 2009, down from 1 459 last year, but still up on 1 249 in 2007) and they have become adept at dealing with the growing numbers.

This year, for instance, they have six repeats of the micro economics lecture per day, some running concurrently.

Departmental manager Gadija Allison said: "Our numbers are always high and so we are prepared for it."