Colleague regains use of arm, thanks to prosthetic help 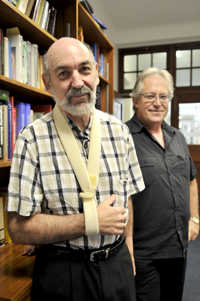 It was a serendipitous discovery when Dr George Vicatos realised the titanium prosthesis he was designing was destined for someone close to home - his colleague in the Department of Mechanical Engineering, Professor Gerald Nurick.

For over eight years senior lecturer Vicatos has been designing titanium prostheses for bone replacements, the demand resulting in a manufacturing company, ISIQU (isiXhosa for 'whole body') Orthopaedics, established in Westlake Park in 2004.

The business started humbly at UCT and graduated to a highly specialised manufacturing unit. When Vicatos first began his enterprise, his prostheses came onto the market at prices well below imported products.

Since then, Vicatos has designed nearly 500 custom implants, some destined for tumour patients, others for trauma cases, and others to replace failed or old implants.

Nurick had developed a tumour in his proximal humerus and needed a replacement that included a joint design for the shoulder.

Vicatos set to work but it was only when he saw Nurick's name on the X-ray showing the diseased bone that he realised who the patient was.

Nurick underwent surgery in January and is undergoing chemotherapy and physiotherapy to mobilise the muscles.

The partnership between Vicatos and a local surgeon has meant that many patients like Nurick lead normal lives.

Some prosthetic designs are simple, others are designed modularly, "like Lego pieces", to accommodate a variety of sizes, and give the flexibility to the surgeon to decide during operation which modular piece to chose.

Others are complicated, especially bones like the scapula and pelvis. These are reverse engineered, which means that the patient's MRI or the CT image is translated into a workable CAD surface, giving the exact contours needed to design the implant.

Children and young adults present greater challenges as they are still growing. Vicatos has developed mechanically extendable implants for the long bones, which help the limbs to be of equal lengths.

Because these implants still require surgical intervention to make them 'grow', he is currently researching the possibility of implants with motors that can be triggered by an electromagnetic field outside the body.