New stars for Ikey Tigers as Varsity Cup kicks off 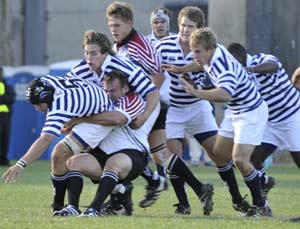 Get out your supporters' scarves and T-shirts. The 2009 FNB Varsity Cup is about to take back Monday nights, starting on 2 February when the new-look Ikey Tigers, captained by JJ Gagiano, take on the Maties at 16h45 on home ground.

The game will be preceded by a friendly match between UWC and Fort Hare at 13h45, and the University of the Free State (Shimlas) vs Nelson Mandela Metropolitan University (NMMU) at 14h45.

All three games will be played at UCT's Groote Schuur fields and will be televised live on SuperSport.

A total of 19 matches (including the playoffs), is set to be televised over the two-month campaign. Each team will host at least three home matches.

Coming off a highly successful debut season in 2008 (the Ikeys narrowly lost to Maties in the final but were lauded for their winning brand of rugby) the Ikey Tigers will be looking to continue their form with a new, young team hoping to emulate the stars of last year's campaign.

Victims of their own success last year, many of last year's stars have gone on to bigger things. UCT's Mat Turner, for example, one of the standouts of the 2008 Varsity Cup, is now competing against some of the best in Europe as a Premiership player in England. Game-breaking flanker Kyle Brown is now part of the SA Sevens squad and flyhalf Matt Rosslee played for the United States last year.

"But we have a helluva nice crop of youngsters and enough really talented players to build with," Dobson said. "It's a nicely representative side who've come through local schools and UCT.

"Last year we had to recruit the team piecemeal. Now we're working with about 50 players who have come to UCT to study and play rugby. Suddenly we have depth and talent."

Look out for Tim Whitehead at centre and flankers Enoch Panya and Koselo Losake, all of the Eastern Cape.

The youngest team in the tournament, and certainly not the biggest, says Dobson, the Ikey Tigers will look to offset physicality by playing their vaunted brand of "adventurous youthful, running rugby".

Part of their warm-up campaign and in a bid to grow rugby, the Ikey Tigers take on the Stormers in Riebeeck Kasteell on Saturday 17 January.