Fairall, the "face and voice" of astronomy in South Africa 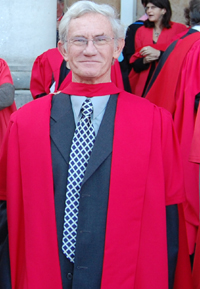 The astronomical community world-wide has lost a great friend and colleague following the untimely death of Professor Tony Fairall on Sunday 23 November. Most people knew Tony either from their undergraduate student days at UCT, as a colleague on campus, from his hugely popular Star Finder course at the Cape Town Planetarium, countless interviews on radio and other media, or his various popular astronomy books.

I first met Tony on an observing trip to Sutherland in 1993. As a young graduate student from Groningen in the Netherlands, I came to South Africa to map the galaxy distribution in the Great Attractor together with Tony, a long-time collaborator of my supervisor in Groningen, Renée Kraan-Korteweg. To be able to recognise Tony at the airport, he carried The Universe under his arm, a heavy book containing a catalogue of galaxies.

During that observing trip, Tony had invited his first-year UCT students to come to Sutherland for a weekend visit to the observatory. These star-gazing weekend visits were an integral part of his legendary undergraduate course, Introduction to Astronomy, which he taught for 36 years.

Our long observing evenings were filled with practical jokes (of which he was occasionally the subject himself), star gazing, discussing science, and of course the sound of Pavarotti echoing into the depths of space from the observing room of the 1.9-m telescope.

This observing trip was the start of a long academic and personal friendship. We met again in 1994 in Paris at a conference on the Great Attractor where we shared a room for the duration of the conference; so characteristic of the unassuming and gentle nature of Tony - the professor sharing accommodation with a graduate student.

In 1995, following Tony's invitation, I came to Cape Town to begin my PhD under his supervision. Tony was a father to all his postgraduate students, a sentiment I see reflected in all the messages of support for his family from his former students. He guided us along the path of scientific discovery, logic and interpretation with his inexhaustible enthusiasm and infectious love for astronomy, overseeing the transformation from student to colleague.

After hearing the news of Tony's tragic accident, the Astronomy Department held a small gathering for staff and students where we all reflected on how Tony had touched us. It was wonderful to witness how this small department reflects the spirit of a close family. This can be attributed largely to Tony's kind and gentle-natured spirit, and is in recognition of the role he played in shaping the present department, greatly attracting his long-time colleague Prof Kraan-Korteweg to take up the headship in 2005.

Our thoughts in these testing times are with Tony's wife Alex and his children, who can take comfort in the thought that Tony touched the lives of so many astronomers and students from all corners of the world.

When next I am on top of Camel Rock in Sutherland, the memories of fun-filled observing evenings and the sounds of Pavarotti will echo through my mind.