A-ratings for sociolinguist, astronomer and neuropsychologist 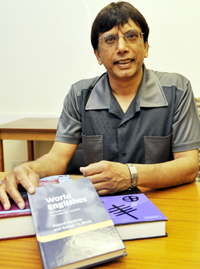 Warner's A-rating is a re-award.

"This attempts to show that non-standard and undervalued varieties of languages are as important for linguistic and sociolinguistic theory as their more empowered standard counterparts, and are no less challenging intellectually," he said.

He has worked on several varieties of English, especially the 'Indian English' and 'Black English' of South Africa, on the pidgin Fanakalo, comparing it to early second-language versions of Xhosa and Zulu, and on the variety of Tamil that had developed in the sugar cane plantations of KwaZulu-Natal among the descendants of indentured workers.

"I am naturally pleased to have my work recognised in this way, both by peers in linguistics as well as more demanding research assessors. But I am more pleased because it shows the discipline of linguistics to be in good standing in South Africa." 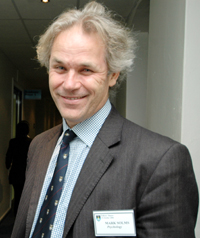 After obtaining his PhD at Wits, Solms emigrated to England in 1988. There he was appointed a lecturer in psychology at University College London, and an honorary lecturer in neurosurgery at St Bartholomew's & Royal London School of Medicine.

When he joined UCT as the first Chair of Neuropsychology, Solms kick-started a new area of expertise in the Department of Psychology. He'd earned an enviable reputation in Europe and the United States, specifically at University College London (UCL). His main area of expertise is linked to his PhD thesis, The Neuropsychology of Dreams. His text on neuropsychology - the study of how the brain influences behaviour - is considered one of the most influential in the field.

This kind of research requires a wide range of clinical cases, and South Africa has a broad patient population, offering great research opportunities, he said.

Solms has published 350 journal articles and book chapters and six books, the last of which, The Brain and the Inner World, has been translated into 12 languages. He is currently editing and translating the Revised Standard Edition of Sigmund Freud's complete psychological works (24 volumes) and his complete neuroscientific works (four volumes).

"The NRF rating process can sometimes be a bit of a lottery, so I am relieved by the outcome," Solms said. 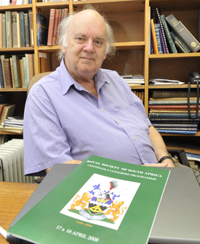 Warner, Emeritus Distinguished Professor of Natural Philosophy, has been re-awarded an A1 rating for work that gained him international repute over decades, research interests that include cataclysmic stars, pulsating degenerate stars and the history of astronomy.

Trained in the United Kingdom, Warner has a Doctor of Science from Oxford University (1986) and a Doctor of Philosophy from the University of London (1972). He headed the Department of Astronomy at UCT from 1972 to 1999.

He has published prolifically, with over 10 books and 350 research papers to his name. He received the UCT Book Award in 1997.

Warner is vice-president of the International Astronomical Union. This year he was named an Honorary Fellow of the Royal Society of South Africa. In 2004 he won the Gold Medal from the Academy of Sciences of South Africa.