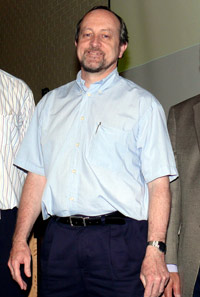 Associate Professor Iain MacDonald of the School of Actuarial Science has become the first UCT academic to win the coveted Sichel Medal. This is awarded annually by the SA Statistical Association for the best paper published the previous year in a peer-reviewed journal.

The medal was named after the late Professor Herbert Sichel in 1997, "one of the grand old men of the SA Statistical Association".

Sichel was a statistician who made great advances in both theoretical and applied statistics, pioneering the science of geostatistics as well as operations research in South Africa.

The SA Statistical Association awarded two medals: one to MacDonald and the other to co-author Professor Walter Zucchini, a former UCT academic now at the University of Göttingen.

Their winning partnership began many years ago and has produced, inter alia, their 1997 book on hidden Markov models. More recently they collaborated on the book Hidden Markov Models for Time Series: An Introduction Using R, due for publication next year.

For MacDonald this has been an award-winning year. In July he won the award for Best Contributed Paper from Africa at the International Biometric Conference in Dublin.