Just about the first thing Dr Jeff Murugan does when he steps into the office in the morning is log on to the electronic bulletin boards.

As a mathematical physicist leading UCT's String Theory Group, part of the Cosmology and Gravitation Group in the Department of Mathematics and Applied Mathematics, his first interest is just catching up on the latest developments in the field.

His second, perhaps more pressing worry is that he and his group members might have been scooped yet again by some or other paper. That's happened four times already this year.

But that's to be understood in the fast-paced world of string theory. First developed in the 1960s, string theory is hardly the new kid on the block. Its premise is that just about everything in this universe, from an electron to a star to a black hole, is made up of small vibrating strands of energy known as strings. Other hallmarks of string theory are supersymmetry, which holds that there is a yet-to-be discovered twin for every known particle in the universe, and talk of at least 10 dimensions (including the observable three of length, width and depth, plus time).

But after 30 years of not one testable prediction, some are ready - no, baying - to write string theory off. On the one hand.

On the other, a flurry of research, soaring student interest and unflagging - if not always flattering - media attention would suggest that string theory is yet to come into its own. Murugan thinks so, anyway.

But not one prediction that can be put to the test? After 30 years?

"You can't put a timeline on creativity," Murugan argues. (Hey, he points out, it took some 70 years before the technology was developed to test - and confirm - a theory first mooted by Einstein in the 1920s that, at very low temperatures, an ideal gas could condense into a highly degenerate state that would come to be called a Bose-Einstein condensate, which won its 'discoverers' the 2001 Nobel Prize in Physics.

So, too, string theory has made a number of predictions - such as the extra seven dimensions - but the technology has yet to catch up, Murugan adds.

Others are not convinced. Like Distinguished Professor George Ellis, one of Murugan's own doctoral supervisors.

For years now, Murugan and Ellis have had a running battle on whether String Theory has a leg to stand on. Their disagreement centres mainly on the issue of quantising gravity, ie the problem of getting a consistent description of small-scale, high-energy effects in gravitating systems.

Murugan and other string theorists believe it's not possible to quantise gravity on its own. To study quantum gravity effects in a lab environment, for example, requires astoundingly high energies to accommodate the relative weakness of gravity, the weakest of the four forces.

But, says Murugan, once you push energies up that high, all the forces get so tangled up that it makes no sense to make sense of them individually.

"At that point, the four interactions all start speaking to each other. They become so strongly coupled you can't disentangle them."

("That sounds sensible," holds Ellis, "but I do not think that string theory is necessarily the only way to go to achieve this result." He opts, instead, for "the broad nature" of an alternative programme for quantising gravity called Loop Quantum Gravity, which uses technical methods that have also been used successfully to quantise other forces. But, admits Ellis, "both programmes are speculative and incomplete, and we do not have evidence that either is correct - or that either is wrong. The situation is that we know very well how things work at lower energies than [the high energies that] occurred in the first few seconds of the very early universe. We have to extrapolate from the known to the unknown to understand higher energies, and there are different ways to do this. We can't yet prove which is right and which is wrong.")

But the argument hints at another, much trumpeted, claim of string theory. As things stand, the weak and strong nuclear forces and electromagnetism live happily together in quantum field theory, but remain at odds with gravity, as described in Einstein's Theory of General Relativity. 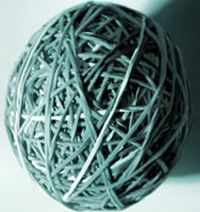 String theory, though, has been hailed as that one theory that, when all the pieces fall together, would be that oh-so elusive Theory of Everything, the mathematical theory that would finally unify the fundamental forces of nature into one, clean, formulation.

But that may just be poor marketing, says Murugan.

In a reductionist model, where matter is broken down into ever-smaller building blocks - from molecules to atoms to nucleons to quarks - when building back up, you eventually hit a wall of complexity that we don't understand, he argues. By billing it as a Theory of Everything, string theorists may have done themselves a disservice.

"It sets up expectations that can't be met," says Murugan.

Either way, string theory continues to win new converts. At least at UCT, where Murugan's group has just launched an honours course.

"It's an exciting field because things are moving so fast," says Migael Strydom, one such honours student. "And it's got some interesting mathematics."

Murugan's even had to turn down some applications for sheer lack of personnel. (Dr Amanda Weltman, who runs the group with him, is currently based at Cambridge University For now, the group consists of two faculty members, one postdoctoral research fellow, three doctoral students and an MSc student.

And with generous support from the likes of the National Research Foundation and the Department of Science and Technology, things are looking up for the group.

"The scientific community here in South Africa is growing significantly," says Dr Alex Hamilton, the postdoc who joined the group from the US. This at a time when financial support for scientists is taking something of a nosedive in the US. (A recent Newsweek article suggested that US scientists are making a cross-Atlantic exodus to Europe and the Large Hadron Collider in Switzerland.)

And thanks to the telecommunications revolution, even geographically isolated South Africa can get in on the action. The electronic archive he dips into daily has gone a long way to levelling the playing fields, says Murugan.

"Now Calcutta is as competitive as Caltech."

The String Theory Group is also attracting several overseas visitors over the coming year. In December, it's staging a small meeting of local and international scientists to huddle over topics of interest to researchers in the group.

And come August 2009, Murugan and Ellis will take their difference of opinion to the next level at Foundations of Time and Space: Reflections on Quantum Gravity, a gathering of minds at UCT to celebrate Ellis' 70th birthday. Here they will table viable tools - Murugan's String Theory and Ellis' Loop Quantum Gravity among them - to bring together Quantum Field Theory and General Relativity.

Such is the interest in the meeting, which promises to bring together some of the leading names in the field, that Cambridge University Press has already signed on to publish the proceedings.

"We're hoping that this book will be the benchmark for Quantum Gravity and where the field stands at the moment," says Murugan.

It may well become the envy of others who scour their electronic archive in the mornings.