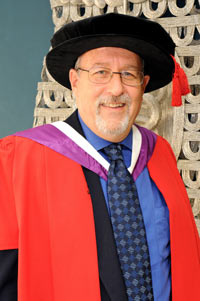 Too often the legacy of race science has overshadowed the valuable contributions of forensic anthropologists to the origins and history of communities, Professor Alan Morris (human biology) said at his inaugural lecture, The Politics of Old Bones on 14 October.

Though sometimes dogged by misunderstanding and political gamesmanship, Morris explained how their work provides clues to the sometimes unrecorded histories of local communities.

"Not everyone thinks that what I do for a living is respectable. For a significant and very vocal group here in Cape Town, anyone who studies the physical remains of humans is not a legitimate scientist."

This is because the work of forensic anthropologists still remains tainted by the kind of race science favoured by groups like the Nazis and the architects of apartheid. Large sectors of the public remained unaware of changes that had occurred since.

"There are still activist social scientists who believe schools like Wits and UCT are centres of 'racial science'. This came to a head during the excavation of the Prestwich Street remains in 2003 and 2004 and resulted in a situation where a whole series of archaeological skeletons have been excavated but not studied."

The fact grieves him still.

Morris said he welcomed the new approach to dealing with human remains, embodied in the Vermillion Accord. This does not prevent the excavation of old human bones but demands that archaeologists work in tandem with descendant communities.

"Researchers and relatives are asked to reach agreement in which both the wishes of the descendant communities and the legitimate concerns of science and education are negotiated."

Read the full text of the lecture