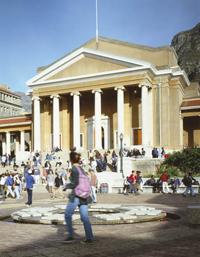 The Times Higher Education rankings are considered the primary benchmark for comparing universities across borders.

Vice-Chancellor Dr Max Price said: "It is great that UCT rates so high. We are pleased that we are competitive in the international higher education sector."

He added: "The rankings give us a sense of our position when measured using a specific set of criteria. As an institution, we constantly measure ourselves and the quality of our entire enterprise on our own well-developed set of criteria. This is an ongoing process aimed at continuously improving and strengthening our institution."

This year's THE-QS World University Rankings have reflected the increasing value attached to technology. Many top technology-based universities improved their position, a fact linked to a demand by international employers for more technology-literate graduates.

The Top 10 was still dominated by institutions from the US and UK. Harvard University kept their top spot, with Yale moving ahead of Cambridge for the second spot. Oxford dropped to fourth, while Princeton dropped out of the top 10, replaced by the only new entrant in the top 10, Columbia University.

Universities from 33 different countries (28 countries in 2007) are represented in this year's top 100.