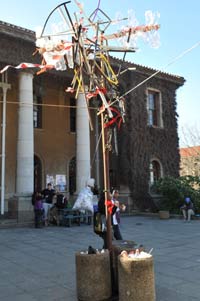 Speaking on 5 August during a panel debate on the integration of sustainability, which was part of UCT's Green Week campaign, Hall reiterated former Western Cape MEC for Environmental Affairs, Tasneem Essop's point that carbon emission should be tied to inequality and poverty alleviation.

"If we cannot do that and stop carbon emission, we will continue to see the rise of global temperatures by 2 degrees Celsius, leading to endemic natural disasters."

He said the problem, like HIV/AIDS, will be a growing concern during the next 20 years, and presents opportunities for higher education institutions to show society how the situation could be turned around. Having good policies and good practices, looking at curriculum opportunites, as well as co-ordinated research can do this. Hall suggested UCT should set its own carbon emissions targets and that there should be incentives for less energy consumptions.

"In doing that, we will surely make significant savings".

There was also a Waste Monster on campus (above), a laager set up as an interactive re-cycling and dialogue zone for the creation of a large-scale rubbish monster.