Rose-Innes on the winning trail with Poison 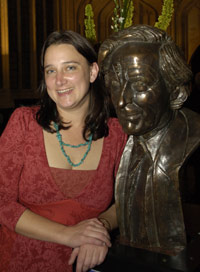 Alumna Henrietta Rose-Innes has won the 2008 Caine Prize for African Writing, announced at the Bodleian Library in Oxford earlier this month, for her "post-apocalyptic" short story, Poison, set in Cape Town.

It's a coup for UCT's MA in Creative Writing course that two of its graduates, Rose-Innes and Mary Watson (2006), have won the award, considered to be the "African Booker".

The Chair of Judges, Southbank Centre Artistic Director Jude Kelly, said that her story showed "a sharp talent, a rare maturity and a poetic intelligence that is both subtle and deeply effective. It is writing of the highest order".

Rose-Innes was shortlisted for the Caine Prize in 2007 for her short story Bad Places. Last year she won the 2007 HSBC/South African PEN Literary Award for Poison.

Rose-Innes said she hoped the attention would lead to wider publication for her novels.

"The prize itself, of course, is substantial and will make a big difference to my working life: I will be able to do less 'money work' and devote more time to my writing, which is an enormous advantage."

Vice-Chancellor Dr Max Price added his congratulations: "Henrietta's work shows that young South African writers have exciting contributions to make to the continent's literature. That her triumph comes in the wake of Mary Watson's 2006 Caine Prize, shows what remarkable depth we have among our writers. That UCT helped shape them makes us especially proud."