It's all in the spots.

That's what scientists have used for a new visual surveillance system that will capture reliable data on the population dynamics and social behaviour of endangered species like penguins, whales and butterflies, animals with distinctive markings on their bodies.

Working with African penguins (Spheniscus demersus) on Robben Island, they are using the intelligent, visual surveillance system to track the birds. Penguins have distinctive patterns of black spots that don't change as they grow and moult. 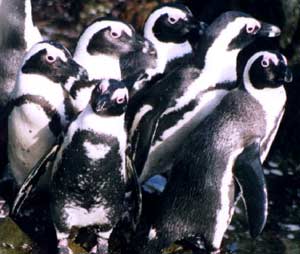 The basic image-recognition system can be used for any species with complex surface patterns, including sharks. And by using infra red imaging, animals can be scanned day and night.

"Tilo's software can 'fingerprint' the penguins from their spot patterns," Underhill said. "The beauty of the system is that it can be integrated into wildlife habitats as a non-intrusive means of capturing detailed and reliable data," Burghardt said.

The research advances techniques that originated in computer vision and human biometrics. Sherley has set up a camera along the "penguin paths" on the island.

"Robben Island has these penguin highways that you don't get elsewhere," Underhill added. "You can use the information to determine patterns of arrival and departure and whether the patterns change in time and in relations to food availability."

The Penguin Recognition Project is supported by international environmental charity Earthwatch, and the Leverhulme Trust. It is the brain child of Peter Barnham, Professor of Physics at Bristol University and penguin fanatic.