Inaugural lecture on parasite that persists 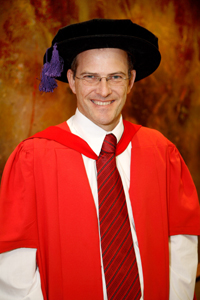 Research by Professor Tim Egan and his colleagues in the Department of Chemistry may herald a new class of antimalarial drugs that are active against chloroquine-resistant malarial parasites.

Egan presented this research during his inaugural lecture, hosted on 14 May.

He prefaced his lecture, From a Black Discolouration in the Brains of Roman Cadavers to Modern Drug Target: The saga of malaria pigment and the search for antimalarial drugs, with sobering statistics.

The majority of malaria deaths occur in children under five - the equivalent of about 13 jumbo jets full of children crashing every day.

Summarising the work being done in his laboratory, Egan said: "Our approach has been directed at making molecules similar to chloroquine to identify the role of different parts of the molecule in the activity of the drug."

"These finding have been used to design a new class of antimalarials related to chloroquine, but which contain a fragment that has the ability to reverse chloroquine resistance," Egan said.

This particular study is being conducted by PhD student Vincent Zishiri. It has produced three novel compounds which the researchers hope will perform better than chloroquine against chloroquine-resistant parasites, but which will also be active in reversing chloroquine-resistance in the parasites.

"Many steps are required to turn these into new antimalarial drugs, but this is a promising first step," Egan said.