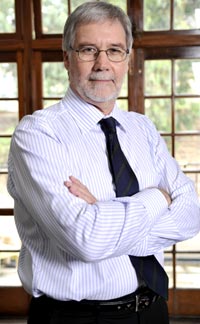 This is the second such award for the faculty in recent months. Earlier this year Prof Drucilla Cornell (customary law) clinched an A1-rating.

A former dean of the law faculty (1996-1998), Visser was educated in South Africa and the Netherlands, obtaining doctorates in law from Pretoria University in 1980 and the University of Leyden in 1985. He is a sometime holder of the Huber C Hurst Eminent Visiting Scholar Chair at the University of Florida.

At UCT, he teaches comparative law, comparative legal history, the law of delict, and unjust enrichment. For the past five years he has taught comparative law in the Juris Doctor programme at the University of Melbourne, Australia, as a visiting professor. He is chair of the South African chapter of the International Academy of Comparative Law, and a former president of the Southern African Society of Legal Historians.

Visser has also served as chair of the specialist committee of the National Research Foundation's rating panel for law. He is member of the Academy of Science of South Africa, the World Academy of Art and Science and an associate member of the International Academy of Comparative Law.