A day in the life of a Lab Assistant 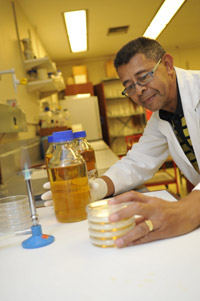 Ask any employee how his or her job is and more often than not you will get a "not too bad" or "so-so" answer. Not so with Charles Hendrickse, a laboratory assistant in the Department of Molecular and Cell Biology. For Hendrickse, his work is one of the best parts of his day.

That probably tells why he has worked in the department for 30 years - and is still going strong.

"This is the work I enjoy the most. I was longing to do it and I've never regretted it," he says.

What do lab assistants do?

In a department that teaches and conducts research on areas such as health and disease, plant and animal pathogens, viruses, genetic engineering, new crops and agriculture, lab assistants come in handy to help scientific officers prepare chemicals for students. Hendrickse performs his duties in two different rooms, the preparation room and the practical lab. He works with bacteria and DNA to prepare solutions for second- and third-year students.

During the first semester things get hectic in the department, as a lot of preparation is required from Hendrickse and the two scientific officers he works with. So, they start three weeks before the beginning of the term so students don't have to wait when they arrive. At that point they prepare their potions based on estimations of the number of students to be registered. Otherwise, it often takes about two days to grow the necessary cells. "We have to put a lot of planning, energy and time into the job," he says. Hendrickse said he has learned how to make cells competent so they are active for use. "The cells have to be active and ready when students want to do their projects."

The highs and lows of the job Hendrickse enjoys his job so much that he gets irritated when things don't go according to plan. That is the only low point of his work, but there are always back-up plans to overcome problems.

But working with students has kept Hendrickse going for three decades, having started at UCT as a cleaner and proceeding to work in the animals' section before joining the lab. "I love students, it's nice to work among them. They are everything to me, I feel great when I stand and show them how to molecule, to flame, the basic principles of the work."

The job has its rare moments

Hendrickse said many years ago a student was flaming a loop next to a bunsen burner when his long hair caught fire. "The whole class burst into laughter. They felt sorry for him but that could not stop them from laughing," he said.