Ndebele to be honoured by Michigan 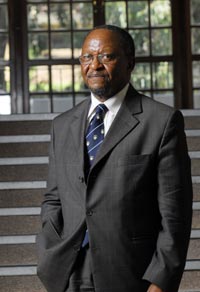 The University of Michigan (U-M) in the US earlier this month announced that they will award an honorary Doctor of Laws degree to Professor Njabulo S Ndebele, UCT Vice-Chancellor and Principal.

Ndebele will receive the award at a graduation ceremony at U-M in April.

The US university stated that the award acknowledges Ndebele's achievements as a writer, his contributions as a leader in higher education in South Africa and Africa, as well as his role as UCT Vice-Chancellor.

The institution also noted that the award recognises Ndebele's particular contribution to creating a diverse, multiracial institution; for expanding the institution's research mission by encouraging new partnerships within the country and internationally; for increasing the number of research doctoral students at UCT; and for positioning the challenge of HIV/AIDS centrally at UCT - in terms of both services to affected students and efforts to address the growing pandemic.

"I feel honoured," said Ndebele. "The University of Michigan has a rich history of academic excellence and leadership in tertiary education. It will be a privilege to join their list of honorary graduates."