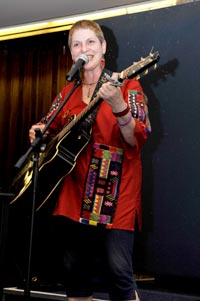 Wielding a guitar, some frank anecdotes and a "tell it like it is" visual presentation, Cohen told UCT medical students that HIV is the new struggle. She was a guest of the Transformation and Equity Working Group.

A dentist at the Gauteng Department of Health, Cohen had noticed a marked increase between 1991 and 2006 of "trench mouth" among patients at the Lilian Ngoyi Oral Health Clinic where she works. Trench mouth, or necrotising ulcerative gingivitis, is a symptom of HIV.

Part of her response to the HIV pandemic is to train nurses about HIV - and to use her combined experience as a clinician, stand-up comedian and musician to tackle the problem in her distinctive way.

Her point is underscored by sobering statistics:

Of most concern to her is that men are not getting tested, safe sex and the use of condoms is not being eroticised, and that no-one focuses on those who are HIV negative. Citing research, Cohen said 40% of married men are having affairs.