Biology prizes for senior students of tigerfish and baboons 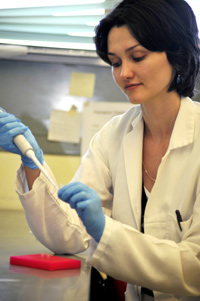 Postgraduate students Sarah Goodier and Riashna Sithaldeen have won the best presentation oral on paper by a master's student and the best poster in systematics and phylogenetics, respectively.

The prizes were awarded at the Southern African Society of Systematic Biology conference, held in the Drakensburg in January, in association with the South African Association of Biology (SAAB).

An MSc student, Goodier's presentation was on the phylogeography of the tigerfish (Hydrocynus vittatus) in south-central Africa.

Sithaldeen's poster, part of her PhD research (archaeology department), was about the biogeography of Chacma baboons (Papio ursinus) across Southern Africa.

The tigerfish is a predatory fish popular with game anglers. Goodier's interdisciplinary study combined molecular genetics (molecular and cell biology department) and geomorphological (AEON), data obtained for the tigerfish to shed light on how biological patterns relate to the drainage topology across the rivers of the subcontinent.

"Patterns of genetic variation of the mitochondrial control region in studied populations have indicated relationships that have allowed for the formulation of a hypothesis, revealing how and from where they came to inhabit their present locations," Goodier explained.

It's a work in progress as the hypothesis of drainage evolution that best describes the current distribution of the tigerfish could change as more samples from additional sites are included.

"In my master's project we're hoping to expand the sample base and look at the patterns of genetic variation in the mitochondrial cytochrome B region as well as in a nuclear marker." 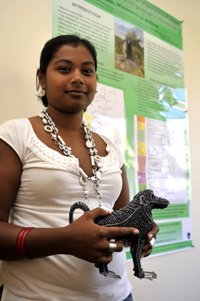 "Essentially, my research examines the genetic diversity and structuring within chacma baboons in Southern Africa."

She's particularly interested in their evolutionary history as a response to climatic and landscape changes in the last two million years (the Quaternary).

"What makes these baboons so interesting is that they are able, through their extreme versatility, to occupy a wide range of ecological niches across most of Southern Africa. I'm very interested in how a large-bodied savannah primate with the ability to thrive under most conditions would have evolved in response to climatic fluctuations."