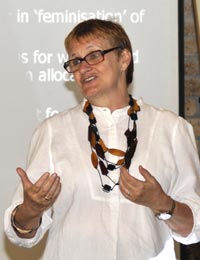 Poverty makes it difficult for women to get health care in their reproductive years and in old age, and they are likely to be poorer than men, visiting UK academic Professor Lesley Doyal revealed.

In her lecture, Sex and Gender in Health and Health Care, presented by UCT's Womens Health Research Unit on 14 February, Doyal said there is a link between gender and poverty as women are less likely than men to have access to resources such money, power and time.

But while women report more sicknesses and distress than men, they tend to live longer. It was important to know that gender is not another term for sex or only about women and equity, but also about efficiency and men's health, added Doyal, a consultant with the World Health Organisation and an honorary professor at UCT.

However, the two are interlinked and constantly influence each other and the mortality of people.

The talk was one of the three that Doyal will present as part of the Faculty of Health Sciences' gender and health initiative, aimed at promoting awareness of gender issues in health and health care among clinicians, researchers, students and other practitioners.