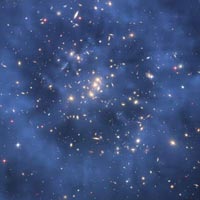 Astronomers at UCT and the University of Portsmouth in the UK have bagged a grant worth over R2 million to work together on the nature of 'dark energy', which is causing the expansion of the universe to accelerate.

The grant is funded by the Royal Society and the National Research Foundation in South Africa, and provides approximately R680 000 to each university per year for two years, with a possible extension for a further three years. It will allow students and scientists at both universities to learn from each other as well as share facilities as they attempt to solve a conundrum that has puzzled astronomers for many years.

"When we combine SALT with new surveys like the Dark Energy Survey available to scientists in Portsmouth we can really make progress. It is great that both our funding agencies saw the synergy here," says Professor Bruce Bassett, the principal investigator in South Africa.