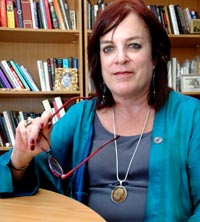 Drucilla Cornell, a research professor of private law, is UCT's first woman to receive an A-rating from the National Research Foundation - and an A 1 rating at that.

UCT's 27th A-rated researcher, Cornell is also a professor of political science, women's studies and comparative literature at Rutgers University. She has a BA in philosophy and mathematics from Antioch College and her Juris Doctor (JD) from the University of California Los Angeles Law School.

Before commencing her academic career, Cornell, a produced playwright (The Dream Cure, Background Interference) was a union organiser.

According to Wikipedia, she played a key role in organising the conference on deconstruction and justice at the Benjamin N Cardozo School of Law in 1989, 1990 and 1993, a conference at which Jacques Derrida is thought by many to have made his definitive philosophical turn towards ethical thought. Cornell has authored several books and many articles on critical theory, feminism and postmodern theories of ethics.