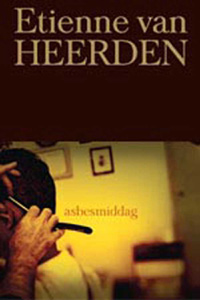 The campus novel has an exceedingly long history. Think of The Groves of Academe by Mary McCarthy (1952), the impressive The Dean's December by Saul Bellow (1982), The Human Stain (2000) by Philip Roth, and the acerbic David Lodge novels, such as the 2001 Thinks.

All these novels take a stand on academia; more specifically, on racism, sexism and political issues and the inability of academia to solve these matters. Generally, one encounters either a sensitive dean who takes a stand, or a lecturer who refers to absent black students as "spooks" and runs into trouble.

In the latest novel by Etienne van Heerden, Asbesmiddag, the narrator is a writer. The reader experiences the world of the creative, innovative, concocting writer, Sebastiaan Graaff, through his words and the interaction in a Stellenbosch hair salon (strongly evoked by the beautiful cover).

Here he enters into a discussion with a rich business magnate (both recognisable and unrecognisable), the salon employees and the owner. Additionally, a university in the city and a relationship with a young student are portrayed.

The book problematises readers' assumptions about the impulse that drives a writer to create a novel, as well as the human propensity to relativise a novel to a familiar incident, person or situation. Van Heerden relentlessly engages his reader in a game: when are we in the novel that is being conceptualised and when are we simply in the fabula?

In the course of the novel, the modern machinery of the university system is subjected to sharp criticism. Meetings, agendas and never-ending planning are addressed, with the underlying refrain that the creative person in South Africa is disrespected - in contrast to the situation in the Netherlands. The modern university system as a "business" becomes a target for the creative artist who, paradoxically, commends the University of Cape Town in his last words because it recognises creative writing as a legitimate research output.

The writer recognises his Oedipal conflict with the institution. He needs to shield himself from something. His young student writes him off as old-fashioned. She is working on a graphic novel and considers his quotations - especially those from Flaubert - as laughable.

Flaubert is a significant reference here: known for his formidable research, for the piles of paper and documents that he pored over, often to finally use only one image. It emphasises the fact that the writing process is grounded in an idiosyncratic type of research process. What is true? What is pretence? Does the lecturer contravene the ethical research committee's codes of conduct if he sends a young student, as a researcher, into dark haunts? Is a master's creative writing student accurate in his remark that he does not want psychological advice but to learn how to write? Is the association between the father and the business magnate a coincidental association with the world of the Karoo in the actual author's novels, from Toorberg onwards?

The relationship with the father - who becomes a sort of Fellini-esque fire breather and later a ringmaster in a circus - activates the immeasurable imagination of The Writer, who delivers a lecture on the writer-as-murderer. The relationship with the dead mother, who the writer wants to leave behind, the fortune teller and the underworld all link to themes in In Stede van die Liefde, which is an incredibly complex novel that has been discussed at length on LitNet (seminar room: In stede van ? psigoanalise). Pinard publicly persecuted Flaubert for his novel. Will readers "recognise" themselves in this novel?

Julian Barnes's Flaubert's Parrot (2002) is clearly referred to as an intertext. Furthermore, the reader is given numerous keys, via Bellow, Roth, and Atwood, to the complex relationship between life and reality, even in the so-called realistic novel.

In the end it is a meta-novel that turns self-reflection in on itself and comments on the slippery, shifting relationship between art and reality. Relevant debates, such as the influence that the internet, SMSs and email have on our thoughts; the taxing Picasso-in-Africa question; creative writing courses at university; the role of the economy; the loss of meaning and implication in translations; the writer as solo researcher versus group research in the sciences (which is further problematised by the expansive list of acknowledgements; among others, of Paul Murray, an historian); city versus countryside; Afrikaans literature as melancholic literature; the role of the canon and history writing and outcomes-based education, are some of the themes that are studied in this novel.

The book is skilfully assembled. With a thorough second reading, one discovers references to the author's oeuvre and the fate of the modern literary person. How does one, for example, teach a Dutch sonnet in a contemporary classroom? (Incidentally: the reference to Auden on page 50 is incorrect. It should read, "For poetry makes nothing happen," in the tribute to WB Yeats.)

Is the ending with Giuseppe far-fetched? And Mister Deejay Gucci X? Who is the greater thief or criminal, a writer or a business magnate? And the working title, Die knoopkameel, refers back to Salammbô! A study of this work would probably be entitled Underway to Nooitgedacht, or Vergedacht perhaps? And then one would also need to incorporate Boccaccio's Decameron and the Russian Formalists' "ostranenie".