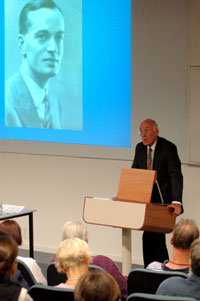 Malaria control has progressed but there are challenges and future tasks to be attended to, bacteriologist Dr Jan van den Ende, has said.

Van den Ende, the son of the late Professor Marinus van den Ende, the former dean of the Faculty of Health Sciences, was speaking at the 50th anniversary of the Van den Ende Memorial Lecture on Malaria Control in South Africa, Progress in Recent Years, held at UCT on 6 November.

He said South Africa is the "toe" of malaria, affecting only KwaZulu-Natal, Limpopo and Mpumalanga. "And we should cut that nail off".

He said malaria was the third most problematic disease after HIV/AIDS and tuberculosis. Mapping malaria's progress between 1970 and 2007, Van den Ende said in 1999 malaria cases rose to 60 000, but the country succeeded to control it. The success was supported by improvements in capacity development, education and improved surveillance and diagnosis.

However, the country has not yet met its malaria control targets, with population migration and service delivery remaining key challenges.