African plants on view to the world online 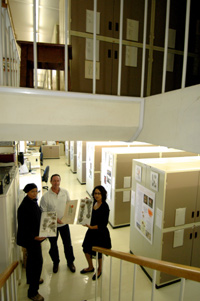 The World Wide Web has made almost everything accessible anywhere in the world. Even indigenous dried plant Type specimens. And even those collected by botanists at the southern tip of Africa in the 1800s.

Thanks to a three-year digitising project that wraps up at the end of 2007, part of the valuable plant specimen collection in UCT's Bolus Herbarium is now also available to the world's scholars online.

The work is part of an international project, the African Plant Initiative, to digitise the Type specimens of African plants in major herbaria worldwide.

Established by stockbroker and amateur botanist Harry Bolus in Graaff-Reinet in 1865, the herbarium, the â€œquintessential collectionâ€ of the Cape Floral Kingdom, is the country's oldest functioning herbarium.

The collection was bequeathed to UCT in 1911. With a collection of over 350 000 specimens, it's the third largest university herbarium in the Southern Hemisphere.

The earliest plant specimens in the collection were gathered by William Burchell in 1824 during his famous travels into the interior.

The herbarium's main function is to underpin teaching and research on the diversity of southern African flora, particularly the Cape Floristic region. Research associated with the herbarium focuses mainly on taxonomy, systematics, biogeography and endemism.

Nearly 15 000 images of the herbarium's plant types (Type specimens are the â€œplant vouchersâ€ that were used to describe the species for the first time) have been scanned at high resolution and the accompanying data coupled to the database of the collections.

These go to Aluka, New Jersey, where the information from participating herbaria is collated and made available online.

â€œThis alleviates the necessity for herbaria to ship these valuable specimens to other herbaria where a researcher who has requested to see the material would view it.â€

Aluka, an international collaboration of educational and cultural institutions, works with libraries, museums and archives around the globe to build a digital library of collections from and concerning the developing world.

â€œThey want to attract collections about Africa from institutions and individuals around the globe,â€ Trinder-Smith said.

All African universities have free access to the site.

Trinder-Smith and project manager Erika Mias and digitising officer Sandy Sauls, have been hard at work completing the mammoth task.

New plant specimens arrive to be added to the collection all the time and this material is first frozen for 48 hours to eradicate bugs.

â€œThere's a whole suite of insects that loves to munch up dry specimens.â€

The value of the collection is its historical record. For example, the herbarium houses a species list for Rondebosch Common, from long before development took place along its periphery.