Sailor king of the sports world 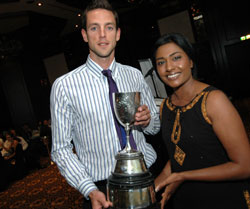 Plain sailing: Gareth Blanckenberg, with guest speaker Kass Naidoo, won both the Jamison Cup as UCT Sportsperson of the Year and the Landstem Trophy for Performance of the Year at the annual UCT Sports Awards Dinner.

It took Gareth Blanckenberg, star sailor of the UCT and South African teams, to break the iron grip women have had on the Sportsperson of the Year trophy in recent years.

At the Annual Sports Awards Dinner on Friday, 26 October, Blackenberg walked off with both the Landstem Trophy for Performance of the Year '“ for taking gold in the Laser class at the All Africa Games in Algiers in July '“ and the Jamison Cup as UCT Sportsperson of the Year. Blackenberg was also part of the UCT squad that won the South African Students Sports Union sailing games, and co-skippered the winning boat at the Lipton Challenge Cup.

Blackenberg didn't hog all the silverware, though. Mountain rescuer Anthony Hall received the Chairperson's Award from Professor John Simpson, chair of the UCT Sports Council. The Turpin Cup for Service to UCT Sport went to Fraser MacDonald of the Mountain & Ski Club.

Mountain & Ski also bagged the Transformation Trophy, collected by Megan Greenwood for the outreach programme that she runs with the South African Education & Environmental Project for kids from communities around the province.

Towering netball star Sphelele Sikhakhane picked up the trophy for as Best First Year. And, finally, the under-20 A rugby squad (pictured left) pipped nine other outfits for the Butterworth Cup as Team of the Year.