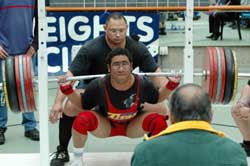 Up and away: Euraima Tobias goes all out at the UCT Open.

Weightlifting: Euraima Tobias of UCT was the best overall lifter at the Craig Nelson Memorial and Development weightlifting competition on Saturday.

Tobias recorded a total of 690kg over his three lifts '“ squat, bench press and dead lift '“ at the event, which is named in honour of a late member of the club and doubles as the UCT Open. Grant Ash and Rodney Wippenaar finished in Tobias' wake. In the development section, Terence Mapanga took top honours with a total weight of 470kg, followed by Tom Gidaracos and Hilary Chisepo. 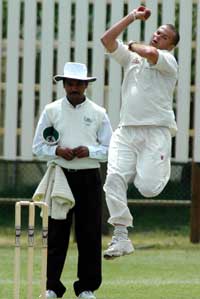 Cricket: Sadly, UCT's first game under new coach Gary Kirsten didn't quite have its fairytale ending. UCT lost by just three runs in its one-day match against Western Province Cricket Club on 6 October, despite boasting former Protea Charl Langeveldt - assigned to UCT by his franchise, the Nashua Cape Cobras - in its line-up.

But it should have been a doddle for UCT, chasing just 160 of its 45 overs. And at 100 for three with close on 20 overs to spare, the team looked to have the game in the bag. But then wickets started to tumble and the runs dried up, and the team finished on 157 for eight.

"How we lost it, I don't know," was all Kobus Olivier, club administrator, could manage to say.

In the picture above: Former Protea Charl Langeveldt in action for UCT this past weekend.