The hidden costs of lung disease in miners 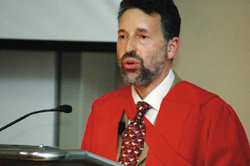 Too little is known about silicosis among former gold miners, particularly black miners, even after a century of lung disease in mining in South Africa, Professor Rodney Ehrlich said in his recent inaugural lecture The Body as History: On looking at the lungs of miners.

Much of the blame could be laid at the door of racial differentiation in access to epidemiologic surveillance, medical examination and compensation for miners over the past century.

Ehrlich (School of Public Health and Family Medicine) has been examining former mineworkers for 23 years and, with researchers like the late Professor Neil White, examining the burden of silicosis and pulmonary tuberculosis in these workers.

Among the first casualties of the dust of the Witwatersrand were the Cornish and other migrant workers from abroad.

" … in 1912 the average working life of a rock driller on the Witwatersrand gold mines was seven years and the average age at death, 33 years."

Ehrlich said the "grim convergence" of silica and tuberculosis among miners over the past century had been greatly aggravated by the advent of HIV in the past 20 years.

Ehrlich said that after a century of industrial development the threat of "miner's pthisis" (a combination of silicosis and pulmonary tuberculosis) among black gold miners is "back with a vengeance".

He added: "We need to ask why, 120 years after the start of the mining industry, there is still a large and rising toll of miners' lung disease, why it continues to be hidden from view and why there is no proper accounting of the costs being borne in the most remote regions of the subcontinent - and why the compensation system is a shambles."