Poetry, then and now 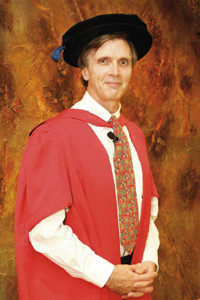 In his inaugural lecture, professor of English studies Kelwyn Sole traced the debates around the role that poets and poetry play in post-apartheid South Africa.

Sole suggested in his lecture, I Have Learned to Hear More Acutely: Aesthetics, agency and the reader in contemporary South African poetry, that free of its narrow political focus, poets are now able to write about other, more traditional concerns of poetry, such as "the life of the individual". But not all shared this sentiment.

"Others insisted that poetry should continue to have a social purpose," Sole said. Themes such as nation-building are at the heart of this still-popular school of writing.

In contrast, the 1990s saw the rise of a group of poets, writing in English, who bucked the trend.

"While they tended to accept a social role, they raised their voices very specifically against writing a poetry merely functional to immediate political ends."

Poetry in South Africa, Sole proposed, has, in some quarters, "taken on a postmodernist patina". This postmodernist influence - with its open and fluid meanings, its disdain for closure - flies in the face of the traditional South African poetry where meanings must be nicely wrapped up by the end of the poem.

However, while South African poetry seemed to be starting to resemble postmodernist trends from the metropole (ie, Europe and North America), it was the outcome of a variety of different styles and impetuses from various sources, both African and global, said Sole. It was premature therefore to simply label it postmodern as only one or two SA poets' work could in the long run be defined as postmodern in most aspects.

There was much more work needed to be done on the specifics as regards poetics and material conditions that were giving rise to so many different kinds of poetry, he noted.

But while poets play around with styles and aesthetics, their works are often sniffed at by both academia and critics, Sole said.

"Poets who spend many hours crafting their work are accused of writing 'throwaway lines' by academics."