Zille and Dyantyi on affirmative action 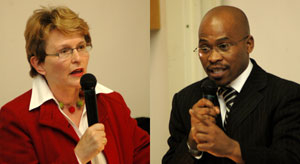 Cape Town mayor Helen Zille crossed intellectual swords with Richard Dyantyi, the MEC for local government and housing in the Western Cape, in a heated debate on affirmative action yesterday.

Zille, the national leader of the Democratic Alliance, argued that affirmative action was a return to apartheid and should be replaced by a corrective action "to put right what was wrong in the past".

She said the representivity notion of the African National Congress mirrored Hendrik Verwoerd's logic and has resulted in goal-displacement. Key to the ANC failure in the past 13 years, Zille said, was in education, a sector critical for equality.

Dyntyi hit back, saying if there was any review of affirmative action, it should be on how it should be accelerated.

He pointed out that 79% of South Africans were black, yet statistics show that 85% of the country's 200 000 unemployed graduates were black. Only 27.2% of senior managers were black and between 4 to 8% of listed companies in the Johannesburg Stock Exchange were black-owned, he added. To change that, Dyantyi said, equilibrium was needed, with gains and losses, which would be achieved at a price.