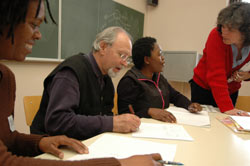 New worlds: Children's writer Niki Daly (centre) works through a story with Xolisa Guzula, Ntombizanele Mahobe and Carole Bloch at the Stories Across Africa workshop at UCT over the past weekend.

Pencils were scribbling, storyboards were pored over and ideas bounced back and forth as writers from 11 African countries gathered at a workshop at UCT over the past long weekend to pull together an anthology of stories that will, if all pans out, be read by children across the continent.

The workshop forms part of the pan-African Stories Across Africa (StAAf), a core project of the African Academy of Languages, the language agency of the African Union. Three anthologies of African stories - one directed at children aged 9-12, the other at teenagers - will come out of the project by the end of this year.

But two calls for stories have failed to scare up enough material for a volume aimed at the formative 0-6 age group, explains Dr Carole Bloch, who co-ordinates the project from the Early Literacy Unit at the UCT-based Project for the Study of Alternative Education in South Africa (PRAESA).

"It's not tradition to write for young children in Africa," says Bloch. "As yet."

Hence the workshop, where writers sat down with illustrators and famed South African children's writer Niki Daly to pen - from scratch - stories, rhymes and lullabies for the anthology.

It'll be a while before the volume makes it into print but, thanks to the workshop, organisers now have a collection of stories and texts to start off with.

In the picture (left), Susie Appleby puts together a few sample illustrations.