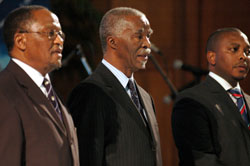 Have the majority of South Africans taken advantage of the victory over racial oppression, or do some still regard themselves as appendages of their self-appointed superiors? This was one of the key questions posed by President Thabo Mbeki in delivering the eighth annual Steve Biko Memorial Lecture in a packed Jameson Hall on 12 September.

Citing "negative social phenomena" such as rape, murder and corruption, Mbeki said that "society has been captured by a rapacious individualism which is corroding our social cohesion, which is repudiating the value and practice of human solidarity, and which totally rejects the fundamental precept of ubuntu". 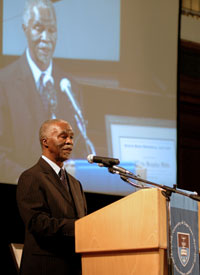 "Is this the kind of society that Steve Biko visualised, that he fought and died for?" he asked.

Mbeki argued for a return to the ubuntu value system.

"Ubuntu, which reminds us that a person is a person through other people, does not allow for an individualism that overrides the collective interests in a community," he said.

The lecture, which was received with rapturous applause and cheering, was introduced by Vice-Chancellor and Principal, Professor Njabulo S Ndebele. Guests in attendance included former heads of state Kenneth Kaunda of Zambia, Joachim Chissano of Mozambique and Jerry Rawlings of Ghana.

For a full transcript of President Mbeki's lecture, click here