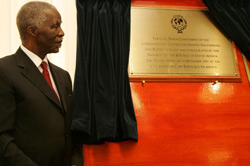 President Thabo Mbeki unveils the plaque at the opening of the Cape Town/UCT component of the International Centre for Genetic Engineering and Biotechnology (ICGEB) on 10 September 2007. Picture: Roger Sedres.

On 10 September, President Thabo Mbeki officially opened '“ to much fanfare - the third component of the International Centre for Genetic Engineering and Biotechnology (ICGEB), which will be based in UCT's Faculty of Health Sciences.

Joining its sister components in Trieste, Italy, and New Delhi, India, the UCT component of the ICGEB will be part of one of the most powerful international facilities for scientific research and training in bioscience. The ICGEB focuses on the needs of the developing world.

'We are also confident that significant scientific advances will indeed be made in the fight against malaria, tuberculosis, pneumonia, HIV and AIDS and other major diseases that, most unfortunately, receive too little public attention,' said Mbeki at the launch.

The South African government, through the Department of Science and Technology, is contributing about R40-million towards the start-up costs for the UCT centre. These funds are sufficient to establish an initial three research groups, which will target infectious and non-communicable diseases, as well as drug development. The centre aims to set up a further four research groups by 2010.

In the picture (above left) is Claire Hoving of the Division of Immunology which is part of the Cape Town/UCT component of the International Centre for Genetic Engineering and Biotechnology (ICGEB). Picture by Roger Sedres.