Netball soars to the top 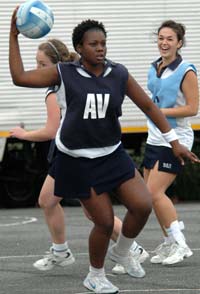 The side boasted a near perfect record, getting the better of teams from Durbanville, Bellville and Tygerberg, among others. This likely means promotion in 2008 to the Super League, the WPNU's top tier. But it's not a move that coach Louise Cameron is keen to take just yet.

As befalls all UCT sports clubs with its strong emphasis on student participation - few 'outsiders' are allowed - the netball squad suffers an annual facelift as senior players graduate. With no stable squad, the side has never really established itself in the Super League, and are typically relegated at each attempt.

'It's a huge jump into the Super League,' says Cameron.

But that's next year's worries. For now, the team is basking in the glow of another promotion and, recently, the call-up of a no fewer than nine players into a score of Western Province junior squads. In time, perhaps, these players will help the UCT team cement a place in the Super League.

In the picture above, Grace Gwiji was among the players that helped the UCT first team to a top finish in the WP A1 netball league.