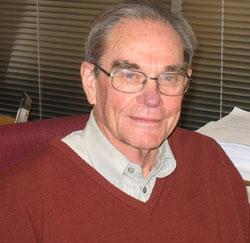 Hon Prof Mark Dry been named the most quoted author in the Catalysis Today journal for his paper, The Fischer-Tropsch Process: 1950-2000.

The Department of Chemical Engineering's Honorary Professor Mark Dry has been named as the most quoted author in Catalysis Today journal for his paper, The Fischer-Tropsch Process: 1950-2000.

Dry's achievement is notable. The journal's publisher, Elsevier, serves more than 30 million scientists, students and health and information professionals worldwide and plays an important role in the global science and health communities. Over 5 250 institutes enjoy access to Elsevier's catalysis journals via ScienceDirect and almost 3.4 million full-test articles were downloaded from the journals in the past 12 months.

Dry, a graduate of Rhodes, Bristol University and Amherst College, worked for Sasol's research department for 35 years. When he retired in 1993 he joined UCT's chemical engineering department where he now teaches a third-year class. He was unfortunately unable to attend a lunch for the authors of the top 50 papers at the North American Catalysis Society Meeting in Houston.