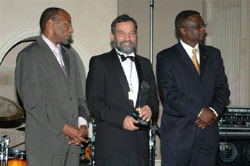 Three UCT scholars were among 19 top researchers honoured by the National Research Foundation (NRF) at its President's Awards, held in Pretoria on 30 August.

The Lifetime Achievement Award was given to former UCT vice-chancellor, Dr Mamphela Ramphele.

The awards, which recognise researchers who have made a significant impact in their field, were presented by NRF president, Professor Mzamo Mangaliso.