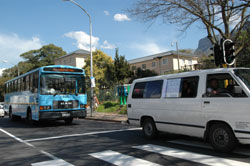 One way traffic: Taxi associations stage a protest along the Main Road, objecting to Jammie Shuttle using the Claremont Route.

Staff and students have been urged to make use of alternative transport as a precaution in the wake of today's (28 August) staged taxi protest along the Main Road.

In an urgent statement to the UCT community, Vice-Chancellor and Principal Professor Njabulo S Ndebele said: 'UCT and Sibanye (the transport company contracted to operate Jammie Shuttle service) have the necessary legal licences and permits to operate the service. We comply with all the conditions in the licensing agreement."

'We are deeply concerned about the threats made publicly by the taxi associations. We have alerted the South African Police Services, the traffic authorities and the Metro Police and we are taking added safety precautions."

'While the Jammie Shuttle will remain operative it might be best to make use of alternative transport if at all possible and as a precaution."

He added: 'You may rest assured that the matter is receiving immediate and urgent attention at the highest level.'