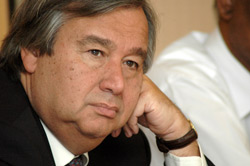 The UN High Commissioner for Refugees (UNHCR), AntÃ³nio Guterres, visited UCT on 23 August to meet with delegates from the Tutumike project, the refugee service providers' network of NGOs in the Western Cape, of which the UCT Law Clinic's Refugee Rights Project is a member.

The Law Clinic is the legal implementation partner for the UNHCR in the Western Cape, and provides free legal service to over 2 500 refugees and asylum seekers annually.

Guterres' visit to UCT was part of a four-country tour of Southern Africa to gather information about issues relevant to refugees and asylum seekers in the region. At yesterday's meeting, Guterres said that due to the increasing complexity around the flow of people into South Africa, role players had to find the best possible response to challenges the country faces.

According to international law and the South African Refugees Act of 1998, refugees have set rights. However, a challenge raised by attendees was that of implementation.

'I will do my best,' Guterres said. 'I'm meeting with the Minister of Home Affairs, Nosiviwe Mapisa-Nqakula, tonight.'

Guterres also met with President Thabo Mbeki during his visit.