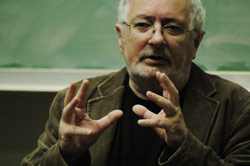 Prolific: Professor Terry Eagleton is on campus from 20 to 24 August to deliver lectures and host a seminar on postmodernism and literary theory.

Academic heavyweight Professor Terry Eagleton is on campus as a guest of the Department of English Language and Literature from 20 to 24 August to deliver lectures and host a seminar on postmodernism and literary theory.

Eagleton is the author of some 30 books on a wide range of subjects, including literary criticism, theology and his memoirs. These include the best-selling Literary Theory: An introduction and, more recently, After Theory.

He obtained his PhD from Trinity College in Cambridge, and then became a Fellow of Jesus College, Cambridge. After spending some years at Oxford at Wadham College, Linacre College and St Catherine's College, he is currently John Edward Taylor Professor of Cultural Theory at the University of Manchester.

He delivered his open lecture on postmodernism to a packed RW James Lecture Theatre on 20 August and hosted an open seminar titled The Death of Criticism? in the English department on 21 August. Eagleton will present a paper titled Revolution and Remembrance at the National Theory Alliance Colloquium, Theory in Question, on 24 August in the English department from 09h30 to 16h00. If you wish to attend the colloquium or deliver a paper, please contact Professor John Higgins.