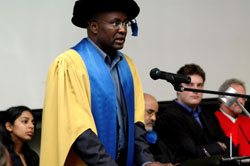 Mbembe is a research professor in history and politics at the University of the Witwatersrand and a senior researcher at the Wits Institute for Social and Economic Research.

Titled Race and Freedom in Black Thought, Mbembe began his lecture by paying tribute to the Vice-Chancellor and Principal, Professor Njabulo Ndebele, for his writings on what the world had become, 'messy knots in which freedom is inseparable from culture'.

'We're untying knots, healing wounds, replacing what was lost,' Mbembe said. 'We're not simply highlighting the distress of the present.'

In drawing distinctions between political and physical freedom, Mbembe drew on political philosopher Isaiah Berlin's 1958 inaugural lecture, Two Concepts of Liberty, in which he famously distinguished between positive and negative liberty, a cornerstone of much of the debate on the relationship between liberty and equality.