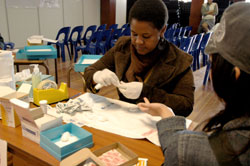 I'll know: Free HIV/AIDS Tests are available to students and staff at the Jameson Hall from 14 to 16 August.

Free HIV/AIDS tests are available to students and staff at the Jameson Hall from 14 to 16 August.

The testing is part of the university's HIV Voluntary Testing and Counselling (VCT) campaign, arranged by the Student Wellness Service in collaboration with the Human Resources Department, HIV/AIDS Co-ordination UCT (HAICU), the Treatment Action Campaign (TAC) and the Students Representative Council (SRC).

The campaign has been steadily gaining popularity since its launch in September last year. The first drive attracted 1 200 people, and the second drew another 2 500.

Pre-counselling and final results are given privately, but for practical reasons blood tests are conducted publicly. 'It is a bit intimidating being tested in a public place because of the obvious connotations,' says a third-year business science student, 'but having the test done here is a way of supporting the idea of getting tested.'

'I'm quite sure I'm safe, but you never really know what you've been exposed to,' explains a second-year BA student.

Further testing will be held from 20 to 24 August at the Medical School. For more information contact the Student Wellness Service (Dr Corinne Landon) on 021 650 1020.