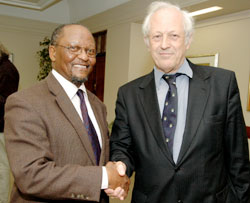 Members of the university community gathered at a lunch yesterday to celebrate Emeritus Distinguished Professor of Complex Systems George Ellis' election as a Fellow of the Royal Society.

The news was announced earlier this year.

The Royal Society is the UK's national academy of sciences and the world's oldest national scientific society. Founded in 1660, early members included Sir Christopher Wren and Sir Isaac Newton. Only 44 new Fellows are elected annually by their peers.

Speaking at the lunch, Vice-Chancellor and Principal, Professor Njabulo S Ndebele, praised Ellis for his humility, his concern with the day-to-day things of life and 'always being available'. He said the Fellowship marked another milestone in the A-rated scientist's distinguished career.

Reminiscing briefly about his Cambridge days, Ellis said if he'd remained at that institution he might have had a more distinguished career. But by returning to South Africa and to his alma mater, he'd enjoyed a more interesting one. Ellis brought to his scholarly contributions a deep sense of social commitment, penning two books on political and socio-economic concerns.

Ellis also paid tribute to his colleagues and mentors. He said the three best things he'd initated at the university were the UCT Book Prize, the postgraduate diploma in organisation managament in the commerce faculty, and the spread of microcomputers at the university some years ago.