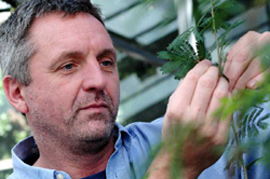 Plant life: Prof Terry Hedderson and colleagues from around the world have proposed a way to barcode land plants using DNA.

UCT's Professor Terry Hedderson is part of an international team that has proposed a set of genetic tools to classify and identify all the world's land plants. If it stands up to scrutiny, the team's landmark technique would contribute dramatically to efforts to document the planet's botanical diversity.

The means to sort and tag all the land plants in the world using genetic information, telling one family or genus or species from another by virtue of their DNA, has eluded scientists for some time now.

It's not been a matter of willpower or even manpower, as such, but rather that scientists have been hamstrung by a technical hitch. Zoologists, for example, have done well to classify animals using a taxonomic method known as DNA barcoding, which involves the use of a short genetic marker in an animal's DNA to identify it as belonging to a particular species. (Scientists borrowed the term "barcoding" from, yes, supermarkets.)

The silver bullet for zoologists was a mitochondrial gene known as coxl or Col, the mitochondria being the ESKOM of a cell.

But the prospects for using mitochondrial DNA to classify plants were never that rosy. For one thing, mitochondrial DNA in plants has evolved much slower than that of animals and, as a result, has not developed the kind of variety that would allow scientists to tell species apart.

Now a consortium of 19 international scientists, among them Professor Terry Hedderson of the Bolus Herbarium in UCT's Department of Botany, think they may well have pulled it off. In a paper in the May edition of Taxon, the journal of the International Association for Plant Taxonomy, the consortium propose the use of three regions of DNA found in chloroplasts, the structures responsible for photosynthesis in plants.

This plastid DNA (chloroplast is a plastid) matches animal mitochondrial DNA in a number of ways. For one, it abounds in cells, making it easy to track down and extract.

It also meets a very tricky second criterion. It offers the variation that scientists are after but, no mean feat, can also be found in all land plants, produced by more than 400 million years of evolution.

That meant that the consortium's primers, which are short sequences of DNA needed to replicate the DNA the scientists were after, had to be of the one-size-fits-all kind.

"The primer regions had to be universal across all plants," explains Hedderson.

The consortium is confident that their selection of plastid DNA will pass muster. As others in the group did, Hedderson tested it on some of his plants of interest, namely mosses and liverworts.

"I could get virtually all of my plants down to species," he reports.

Individual members will reveal their findings in articles over the coming months. The consortium also plans to present its DNA barcoding protocol to the Consortium for the Barcode of Life (CBOL). CBOL is an initiative of some 150 organisations from 45 countries to develop DNA barcoding as a global standard for the identification of all biological species on Earth.

The Taxon article and the CBOL application mean that the protocol will likely be put through its paces by botanists across the world over the coming months.

"They are the ones we have to convince," says Hedderson.

It's not a perfect system, the scientists realise. For one thing, there is no single plastid region that can do the job, thus the choice of three.

But for now it works well enough, they feel, to get plants into the barcoding age.

DNA barcoding techniques can be used on just about any material. That includes, for example, juvenile plants that could not be identified by their morphology, or even ground plant powder. It can even used to identify the constituents of soup. Thus the technique can be very important in conservation biology and enforcing conservation legislation. The ultimate goal is to have a hand-held device a bit like a cell phone, with a chamber that material can be placed in. The chemistry (sequencing) would happen very quickly and the DNA compared to a database. So field workers could get a very quick ID.