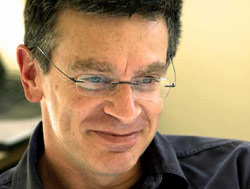 Write stuff: Laurie Nathan is co-winner of a Journal of Southern African Studies' award for the best article in 2006, and the Nelson Mandela International Essay Competition, held by the Royal United Services Institute for Defence and Security Studies (RUSI) in the UK.

A new book and now two award-winning articles. The cup runneth over for Laurie Nathan, but the topic is a serious one.

It's been a season of plenty for Laurie Nathan, research associate in the Department of Environmental and Geographical Sciences.

His new book - No Ownership, No Commitment: A guide to local ownership of security sector reform - was just out when he was named co-winner of the Journal of Southern African Studies' prize for best article in 2006. And now he's heard that he's won the Nelson Mandela International Essay Competition, held by the Royal United Services Institute for Defence and Security Studies (RUSI) in the UK, for his article, None but Ourselves: Democratic design of security and defence policy in Africa.

"The malaise is attributed to three major problems," Nathan writes. "The absence of common values among member states, which inhibits the development of trust, common policies, institutional cohesion and unified responses to crises; the reluctance of states to surrender sovereignty to a security regime that encompasses binding rules and decision-making; and the economic and administrative weakness of states.

"These are all national problems that cannot be solved at the regional level. Paradoxically, the challenge of common security in southern Africa is less a regional than a national challenge."

In the RUSI article, Nathan argues that donor involvement in a country's security and defence policies is dangerous as this can lead to imposition and bullying. Donors will sometimes draw up plans and programmes without even consulting the host nation.