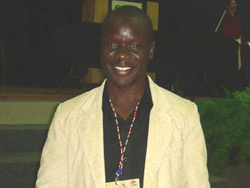 Milestone: Mao Angua Amis won third prize for his presentation at the 21st Annual Meeting of the Society for Conservation Biology in Port Elizabeth.

PhD student Mao Angua Amis set a new milestone by becoming the first student from Africa to win an award from the international Society for Conservation Biology (SCB).

Amis picked up third prize in the category for best student presentation at the society's 21st Annual Meeting, held in Port Elizabeth from 1-5 July. The meeting, which attracted about 1 600 delegates, was the society's first in Africa.

Amis pocketed a cash prize, books and journal subscriptions for his presentation.