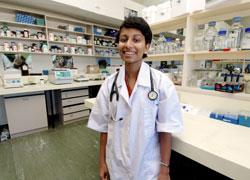 Follow the leader: Maria Jose has just returned from New York where she attended the Goldman Sachs Leadership Institute as a student global leader.

Nineteen year-old medical student Maria Jose has just returned from the Big Apple where she hobnobbed with some of her high-flying international counterparts.

Jose was part a group of about 150 second-year students from over 90 universities in 19 countries who were nominated to the 2007 Goldman Sachs Global Leader Class. Of these, 75 were selected to attend the annual Goldman Sachs Leadership Institute in New York City in July, where they consulted with leaders in the public, civic and private sectors.

The Goldman Sachs Global Leaders Programme recognises top second-year students who have distinguished themselves as leaders in their community or school, and seeks to train the cream of tomorrow's crop. An annual award of US $3 000 (Â±R 20 660) is made to each Global Leader by the Institute of International Education and the Goldman Sachs Fund.

But there's so much more to it than the money. 'Now I'm part of the Goldman Sachs leaders' alumni,' says Jose. 'It's a network of about 750 students around the world; there for advice, collaboration, and idea-sharing.' This will come in handy as Jose would like to work for, or even start, a medical humanitarian organisation.

UCT's Michael Fargher, who did not attend the NY event, was also part of the six South Africans in the initial group of 150.