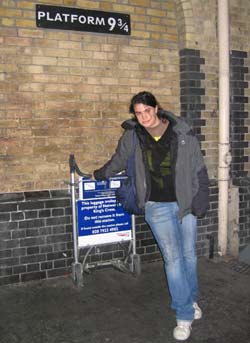 Potterhead: Tara Weinberg is running a series of workshops on the Harry Potter phenomenon to coincide with the recent release of the fifth Potter movie, Harry Potter and the Order of the Phoenix

For the last 10 years, the Harry Potter series of books has been a large part of many young people's lives, but for humanities student Tara Weinberg, it's been huge.

She's been a fan since the age of 12, runs what may be the biggest fan site on Potterdom in Africa and is now co-ordinating a series of workshops for children to share her knowledge on the subject.

The workshops coincide with the release of the fifth Potter movie, Harry Potter and the Order of the Phoenix, last week. After the workshop on 13 July at the MTN Science Centre in Canal Walk Shopping Centre, which included a trivia quiz, a presentation and a question and answer session, Weinberg escorted the group to watch the film.

'The Harry Potter phenomenon has been a large part of their lives,' explains Weinberg. 'The books are so popular because they hook the reader into a believable, magical world, and the notion of believing in magic is very appealing to adults as well as children.'

Her next big event is a sleepover workshop on 20 July for the release of the seventh and final novel, Harry Potter and the Deathly Hallows, at one o'clock the next morning.